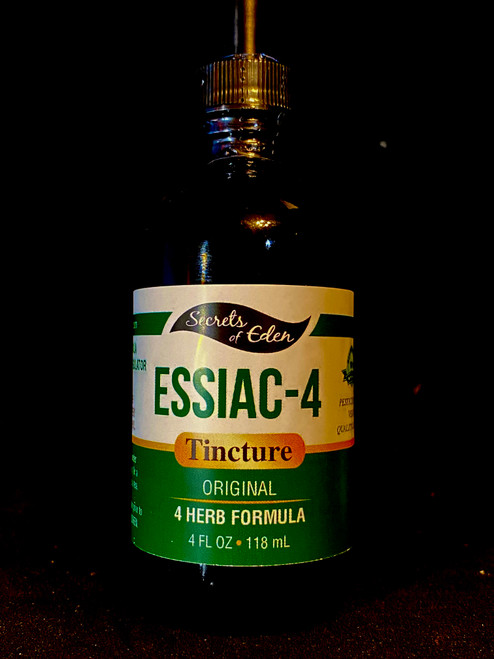 The Secrets of Eden's

"The results we obtained with thousands of patients of various races, sexes and ages, with all types of cancer definitely proves Essiac to be a cure for cancer. Studies done in laboratories in the United States and Canada also fortify this claim."                   Dr. Charles A. Brusch M.D.

The original developer of Essiac, Rene Caisse, in defiance of the authorities, reportedly successfully treated thousands of terminal cancer victims for more than 50 years, yet she never charged for her services and never tried to make a profit from her remarkable discovery. That alone should give rise to serious interest. Rene was offered huge sums of money just to divulge the formula, but always refused.

The formula, involving the combining of 4 herbs, is now known and The Secrets of Eden makes it available as an affordable tincture. Originally Rene did her formula in conjunction with a sympathetic physician via hypodermic injections and tea made as an infusion using boiling water. In our opinion, the tincture is possibly more effective as the process of extracting the resin within the herbs is not done with heat which we believe could be damaging to the enzymatic character of the individual herbs.

Pressure from the medical, governmental, and legal world was so intense on Rene that she was forced to operate underground for a good period of time and even the name Essiac is a code name derived from the reverse spelling of Rene Caisse's last name.

The formula actually originated with an "Ojibwa Indian medicine man." He claimed that the herbal mix was an "holy drink" that would purify the body and put you back in "balance with the great spirit."

In time, of course the "medicrats" sometimes referred to as the league of white-coat Nazis, tried to prosecute Rene for "practicing medicine without a license." The government (of Canada) even tried to force her to turn the formula over to the Cancer Commission, but she was sure if she did they would never use it and keep it a secret in order to further their profiteering from cancer.

With each purchase of Secrets of Eden's Essiac Tincture we include a packet of historical filings and articles that further document the history of Essiac.

....The patients who were started on Essiac have at the present time ... in 8 out of 10 patients, there has been significant improvement in their neurological state. ....I am however most impressed with the effectiveness of the treatment and its lack of side effects.

I feel that this method of treatment should be given serious consideration and would benefit from a scientific clinical trial.

For an historical look at the struggle Essiac has gone through against the establishment, consider  the following Video.

Essaic and 714X kept one young man from running away

It is early evening, and in the basement of Saint Joseph the Worker Roman Catholic Church on Maquan Street in Hanson, Massachusetts, a small group of people sits around a table, discussing their cancers. Phyllis, a fragile-looking woman in her forties, is a newcomer to the group. Her lymphoma has returned. She is here hoping to learn something new. Next to her is a young man in a hooded sweatshirt, hands stuffed into the pockets. His black hair and dark skin hint at his Native American roots. His name is Billy Best, a name that has meaning here. Everyone faces Billy, who does not speak until he's asked a question, and then it spills, a rush of hopeful words.

This is a scene being enacted in so many churches, halls, and living rooms around the globe. If nothing else, cancer is global and knows no boundaries. Here is no different from anywhere else. Except that here they have Billy. And because of him, they have a new kind of hope.

Phyllis has recently begun drinking Essiac tea as part of her regimen. "My family thinks I'm nuts and ooh, do they hate the smell of that stuff! I'm in the kitchen there, mixing up a batch," and she makes the motions of stirring a big pot. "I call it my witches' brew!"

Everyone laughs and nods. Yeah, that's what I call it too, some mutter.

Billy's mother, Sue, is the only one here who does not have or has not had cancer. On the table in front of her, Sue has a bottle of Essiac, nothing like what one expects of a tea. Packaged as it is in a green, round-shouldered bottle with an old-fashioned-looking label, the substance has the quaint appearance of a folk remedy. Alongside the Essiac are copies of newspaper articles and books about Essiac.

Neither of these substances, while legal in Canada, is approved by the Food and Drug Administration in the United States. Technically, what Sue Best is doing here this evening is illegal. However, most everyone who comes to the Bests, who operate under the umbrella of Best Enterprises, does so after trying many other treatments. Sue considers herself a conduit, a passage through which these people can pass if they need to. "A lot of people who use these alternatives have tried just about everything else. It would look pretty sad if they [the authorities] started hassling them at this point in their lives."

As for the money, a bottle of Essiac costs about $40, --not much when compared with the many thousands of dollars involved in conventional cancer treatments. However, insurance companies all steer clear of paying for Essiac .

The meeting lasts an hour. What strikes a visitor is that these cancer patients all have full heads of hair. They appear to be healthy, even vigorous. On this evening Billy speaks mostly to Phyllis, the kinds of things to eat (no red meat, no caffeine, whole grains), and the importance of vitamins. He speaks with the assurance of someone well educated in the topic. There is a reluctance to break, but at last the members rise and climb the steps out into the parking lot. Phyllis hugs Billy like a brother.