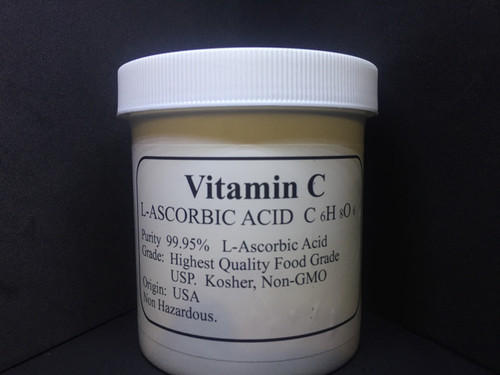 One teaspoon completely dissolves in any liquid = 4000 mg.   For complete body saturation when fighting colds, flu, Cancer or any other disease, increase intake until you reach bowl tolerance.  High dosages of Vitamin C will loosen bowels.   Bowel tolerance is reached at slight gassiness.  At that point, more Vitamin C is not necessary.

Vitamin C is an essential nutrient well known for its vital role in immune system function. It is a highly effective antioxidant that can protect the body's structures from oxidative damage generated during normal metabolism. Vitamin C is also necessary for the production of collagen and is therefore important for skin, bone, and joint health. It is also needed for amino acid metabolism and the utilization of many nutrients, such as folic acid and iron.

Researchers at Weill Cornell Medicine in New York City investigated an alternative therapy that is often regarded as “quackery” by the allopathic community. This therapy has time and again proven itself to be effective in the treatment of certain forms of cancer. This treatment is known quite simply as vitamin C − a nutrient found primarily in citrus fruits like lemons and oranges. And it’s proving to be a major breakthrough in the eradication of cancer.

According to the study’s findings, vitamin C is highly effective in the treatment of colorectal cancer, which claims the lives of some 50,000 people annually. And it’s particularly effective in the treatment of colorectal Cancers bearing both KRAS and BRAF gene mutations, which happen to respond quite poorly to conventional therapies − including chemotherapy.

Lead author Dr. Lewis Cantley and his team learned that amounts of vitamin C equivalent to what you might find in about 300 oranges is enough to impair the growth of both KRAS and BRAF gene-mutated colorectal tumors. This army of antioxidants literally enters the malignant cells, prompting an attack response marked by so much oxidative stress that the cells burn out and die.

And they do this in a rather interesting way that was previously inexplicable by science. Rather than attack cancer cells directly, vitamin C compounds appear to convert into another oxidized substance known as dehydroascorbic acid, or DHA. The DHA tricks cancer cells into accepting it for entry. Only once it gains access, this DHA is converted back into ascorbic acid , causing cancer cells to essentially commit suicide.

Alan Smith’s remarkable recovery from a seemingly fatal infection, discussed here and here, thanks to administration of 100 g/day vitamin C over vigorous opposition from his doctors, highlights both the slow pace of medical progress and the potential benefits of natural healing methods that cooperate with human biology.

The doctors’ adamant opposition to vitamin C treatment is hard to fathom. There is ample clinical experience demonstrating that high doses of vitamin C can help the body defeat viral infections. Moreover, it is among the safest of known interventions.

Vitamin C apparently first developed in plants and land animals about 500 million years ago. An ability to synthesize vitamin C has been retained by most land animals and birds. [1]

Over 4,000 species of mammals can synthesize vitamin C from glucose. In good health, mammals synthesize the equivalent in humans of 2 to 13 g/day; under disease or stress, vitamin C synthesis increases up to 100-fold. [2] Under such conditions, vitamin C synthesis may constitute over 90% of glucose utilization – placing a heavy burden on the liver and arguing that vitamin C must have exceedingly important functions in diseased and stressed states.

Three times in mammals – in bats, certain rodents (guinea pigs and capybaras), and the Haplorrhini branch of the primates (containing tarsiers, monkeys, apes, and humans) – the ability to synthesize vitamin C was lost. [1] The loss in the Haplorrhini line was triggered by a retroviral infection about 60 million years ago.

A few unconventional doctors have generated most of the clinical experience with high-dose vitamin C therapy.

Fred R. Klenner, a general practitioner from Reidsville, North Carolina, was the pioneer. In the 1940s and 1950s, he found that viral diseases, notably pneumonia and polio, could be cured or greatly improved by intravenous sodium ascorbate of up to 200 g/day. (He favored the pH-neutral sodium ascorbate over conventional acidic versions.) Vitamin C was first isolated in 1932 and first synthesized in 1934, so Klenner was a very early adopter. [3

Klenner’s maxim was that the patient should “get large doses of vitamin C in all pathological conditions while the physician ponders the diagnosis.” [4]

Persuaded by Stone and Pauling, a doctor named Robert Cathcart, who had previously invented an improved artificial hip, began using high-dose vitamin C when he took up general practice in Incline Village, Nevada.

He soon made an interesting discovery:

In 1970, I discovered that the sicker a patient was, the more ascorbic acid he would tolerate by mouth before diarrhea was produced. At least 80% of adult patients will tolerate 10 to 15 grams of ascorbic acid … The astonishing finding was that all patients … can take greater amounts of the substance orally without having diarrhea when ill or under stress. [5]

Over the next two decades, Dr. Cathcart treated over 12,000 patients with high-dose vitamin C. He found that vitamin C “markedly alters the course of many diseases.” [3] In his experience, Dr. the limit of bowel tolerance was a “convenient and clinically useful measure of ascorbate need”:

The maximum relief of symptoms which can be expected with oral doses of ascorbic acid is obtained at a point just short of the amount which produces diarrhea. The amount and timing of the doses are usually sensed by the patient. The physician should not try to regulate exactly the amount and timing of these doses because the optimally effective dose will often change from dose to dose… The patient tries to TITRATE between that amount which begins to make him feel better and that amount which almost but not quite causes diarrhea. [5]

Recall that in animals, vitamin C synthesis rises as much as 100-fold under disease. In humans, the limit of bowel tolerance rises up to 20-fold during illness. This suggests that bowel tolerance limit is an indicator of need.

Dr. Cathcart found that vitamin C was helpful in combination with antibiotics against bacterial infections:

The effect of ascorbic acid is synergistic with antibiotics and would appear to broaden the spectrum of antibiotics considerably….

A most important point is that patients with the bacterial infections would usually respond rapidly to ascorbic acid plus a basic antibiotic determined by initial clinical impressions. [5]

Although ascorbic acid should be given in some form to all sick patients to help meet the stress of disease, it is my experience that ascorbate has little effect on the primary fungal infections. Systemic toxicity and complications can be reduced in incidence. [5]

Overall, Dr. Cathcart’s experience was that benefits of vitamin C therapy could be huge.

The method produces such spectacular effects … as to be undeniable. [5]

It’s Not Easy to Test Vitamin C In Clinical Trials

Either this titration method or large intravenous doses are absolutely necessary to obtain excellent results. Studies of lesser amounts are almost useless. The oral method cannot by its very nature be investigated by double blind studies because no placebo will mimic this bowel tolerance phenomenon. [5]

The Danger of Induced Scurvy

I developed scurvy at the nadir of my own chronic infection, so I pass this from Dr. Cathcart along as a warning:

Well-nourished humans usually contain not much more than 5 grams of vitamin C in their bodies….If a disease is toxic enough to allow for the person’s potential consumption of 100 grams of vitamin C, imagine what that disease must be doing to that possible 5 grams of ascorbate stored in the body. A condition of ACUTE INDUCED SCURVY is rapidly induced. [5]

Anyone with a chronic infection, certain or suspected, should be careful to supplement gram doses of vitamin C.

How Does Vitamin C Work?

Dr. Cathcart’s explanation for the benefits of high-dose vitamin C is that exogenous vitamin C comes with high-energy electrons suitable for transfer to the molecules involved in respiratory bursts:

This explanation would be consistent with cell biology studies showing that vitamin C is consumed rapidly during phagocytosis:

However, other mechanisms have been proposed by which vitamin C may support immunity:

The Japanese finding may supply the best explanation for why, in clinical experience, vitamin C is most effective against viral infections. Phagocytic respiratory bursts are more important for bacterial than viral defense.

Since animals upregulate ascorbate production under all kinds of stress, not just viral infections, it seems probable that vitamin C aids health by multiple pathways, not only by antiviral activity.

Vitamin C is extremely safe. Intravenous doses of 120 g/day given to cancer patients have been well tolerated. [10]

One of the reasons doctors give for avoiding vitamin C is fear that it might cause kidney stones. However, Cathcart believed vitamin C was beneficial for kidney stones:

It is my experience that ascorbic acid probably prevents most kidney stones. I have had a few patients who had had kidney stones before starting bowel tolerance doses who have subsequently had no more difficulty with them. Acute and chronic urinary tract infections are often eliminated; this fact may remove one of the causes of kidney stones. [5]

Veterinarians Aren’t Afraid to Supplement Vitamin CIn animals such as chickens that lack the ability to synthesize vitamin C, vitamin C is recognized as a means of supporting bacterial and viral immunity. [11]

More Information
Facts: Ascorbic acid is highly reactive, and the most powerful and fast acting form of vitamin C. In humans, ascorbic acid is fast acting when taken orally because the ascorbic acid can be absorbed through the stomach lining directly into the blood stream. Vitamin C is a water-soluble vitamin, meaning that your body doesn't store it. We get what we need, instead, from food. You need vitamin C for the growth and repair of tissues in all parts of your body. It helps the body make collagen, an important protein used to make skin, cartilage, tendons, ligaments, and blood vessels. Vitamin C is essential for healing wounds, and for repairing and maintaining bones and teeth.
Benefits:
Specifications:
Ascorbic Acid Vitamin C Powder
Following Certificate of Analysis (COA) is transferred from the COA of manufacturer
Extract Testing Method: Titration
Expiration date: 3 years from purchase date.

Based on Cathcart’s testimony, thousands of patients with infectious diseases have benefited from high-dose vitamin C. Although mechanisms are not well understood, vitamin C probably helps along multiple pathways.

A well-tested therapeutic strategy would be to take 4 g vitamin C every hour with water until bowel intolerance is reached. The therapy is extremely safe, and its effectiveness is usually apparent within days.

Given its safety and the ease of testing its effectiveness, why shouldn’t every seriously ill person try this therapeutic strategy? Is there any good reason NOT to try it for at least a few days to see if it has an effect?